The Men’s Health Forum in Ireland (MHFI) was established in response to the growing recognition of the need to address the poor health status of males in Ireland.  However, one of the first challenges facing it was to gain access to reliable data upon which to plan future interventions.  This remains an ongoing concern – as the Forum seeks to work in an evidence informed way.

This barrier was, initially, overcome when MHFI launched its seminal ‘Men’s Health in Ireland’ report in January 2004 (www.mhfi.org/fullreport.pdf).  This document provided the most comprehensive overview of key statistics on men’s health on the island of Ireland ever collated up to that time.

To mark its twenty-first birthday in 2020, the Forum undertook ‘Men’s Health in Numbers’.  Funded by the Health Service Executive’s Health and Wellbeing Division, this sought to produce:

These were officially launched at a webinar on Thursday 10th December 2020, and you are invited to download a free copy at: 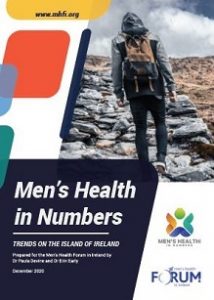